I'm currently trying to add things to the page, so if you would please, add me, Lotta Difference, to your friends! It would be awesome to keep in contact with everyone who comes here! 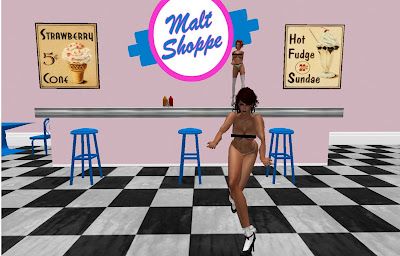 Our last showing of our production of "Summer of Love" was a great success. We saw many new faces in the crowd last evening. We hope that many joined our group for future shows.

This weeks show centered around a world of ... the Rock N Roll era. From when it all started in the 1950's. Songs like "Whole Lotta Shakin' Goin On," "Love is Strange," "Rock Around The Clock" were part of the show. From a malt shoppe to a drive-in theater, the sets helped bring the acts to life. Many in the audience commented on loving the music and didn't leave until well after the show had ended! Goes to show that time of music is enjoyed by many age groups.

We look forward to seeing those and many more at Gweeb's performance Sunday, August 4th at 12pm slt in the theater! Hope to see you there!
By Lotta D. Difference at July 27, 2013 No comments: 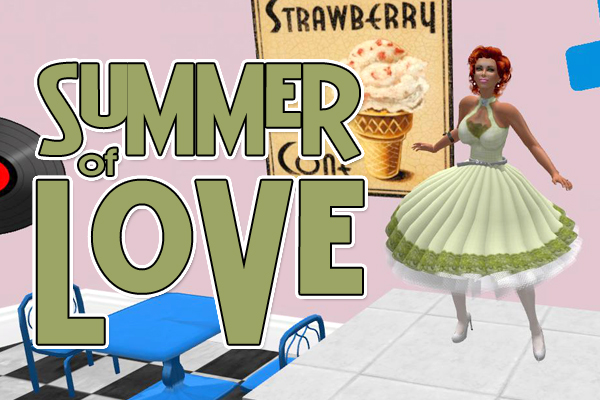 Come join us for an evening of classy but sassy entertainment as we at Paramount dance in our newest show "Summer of Love" at our new time of 6 pm SL this Friday, July 26th.

This weeks theme is all about times gone by... bobby socks, poodle skirts, hot cars and even hotter ladies! You won't want to miss it so make plans to enjoy "Summer of Love" at Paramount Playhouse tonight at 6 pm SL!

Sunday Entertainment at Paramount Playhouse featuring Gootek on Guitar and Vicki Eriksen on - - - hilarity!!!
Sunday July 21st at Noon sl time the Paramount Playhouse presented a live performance by Gootek, who just happens to be a Master Guitarist. Gootek played an hour of a mixture of tunes including blues and rock.  At the Paramount, we think Gootek can play ANYTHING - - from Eric Clapton's bluesey rock to Jimmy Hendrix to a smooth jazz guitar.  He pleased everyone who was in attendance . . . so much so that we have invited him to return on Sunday, August 11th.
SL Comedienne Vicki Ericksen has been performing at the Paramount since shortly after we opened and she is an Entertainer par Excellence. Following Gootek's opening performance, Vicki entertained with her wacky (and naughty) brand of humor from 1 pm until the audience had laughed themselves sick.  Audience responses ranged from "ROFLMAO" to "I just sprayed soda all over my keyboard and monitor!"  Vicki does stand up comedy but she also includes skits, usually involving her sidekick Zoey and the Paramount's own glutten for punishment, Pathmaker.
Vicki is a treasured member of the Paramount Staff; in addition to entertaining on Sundays, she is also a manager and producer, presenting and hosting her own programs featuring Scooter Fallen on Tuesdays at 2 p.m. sl time.
RL takes Vicki away from us for about six weeks, so it will be September before she returns. While she is gone the Paramount Staff will continue to host Scooter Fallen on Tuesdays.  The Staff is taking the day off on Sunday, July 28 but the Playhouse will open again on Sunday, August 4 with singer/guitarist Gweeb.  For the second hour on that day the Paramount Players will present some kind of rampant - and naughty - insanity to keep the audience's funny bones exercised until Vicki returns.
By Lotta D. Difference at July 23, 2013 No comments: 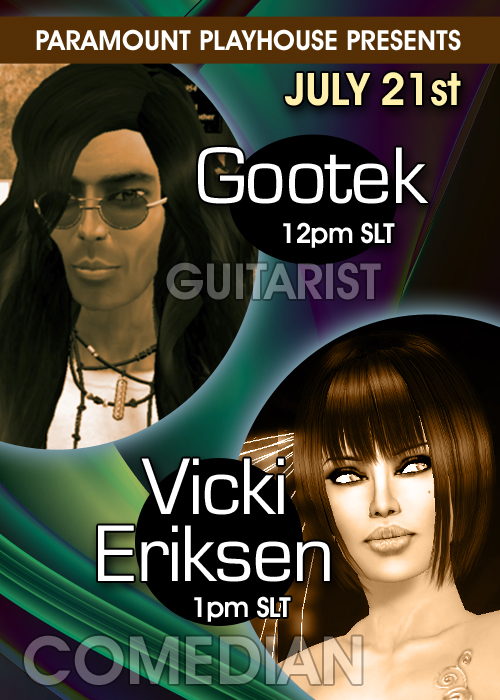 Paramount Playhouse cordially invites you to join us this Sunday, July 21st at 12 pm SL as we host one of Second Life's live guitarists, Gootek. One of the great blues guitarists on the grid today brings his style to Paramount to entertain us with a mixture of covers and improvisation. Drop by and relax and dance to the the smooth sounds of Gootek's guitar - an hour of great music awaits you!

At 1pm, we host  Burlesque Comedienne, Vicki Eriksen, the stories and jokes she tells are almost of not more naughty than the outfits she wears. Hope to see you there!! 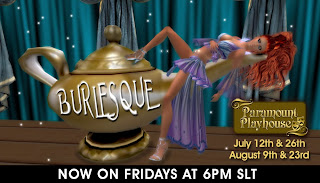 
Paramount Playhouse is moving it's Burlesque-style shows from Sundays at Noon, sl time, to Fridays at 6 pm sl time.


Paramount Playhouse, which has presented a potpourri of entertainment on Sundays, including live singers, comedy and a play as well as burlesque programs since it’s opening in December 2012. We will continue to offer live shows and comedy on Sundays. Pathmaker Campbell-MacGregor, part owner of the Paramount, said, "An occasional ‘saucy act’ might occur on a Sunday from time to time, but overall our Burlesque programs, which we think of as ‘Stripping with Style and Class,’ will now be performed on Fridays at 6 pm slt."
The first program being performed on a Friday at the Paramount will be "Summer of Love" which will premier on Friday July 12 at 6 pm sl time. This program will be repeated on Friday July 26 at the same time, and subsequent Burlesque programs and plays will be presented at 6 pm on designated Fridays.