MARCH 30TH at The Gazebo!

Path may be djing for an hour at The Gazebo to warm everyone up for..... 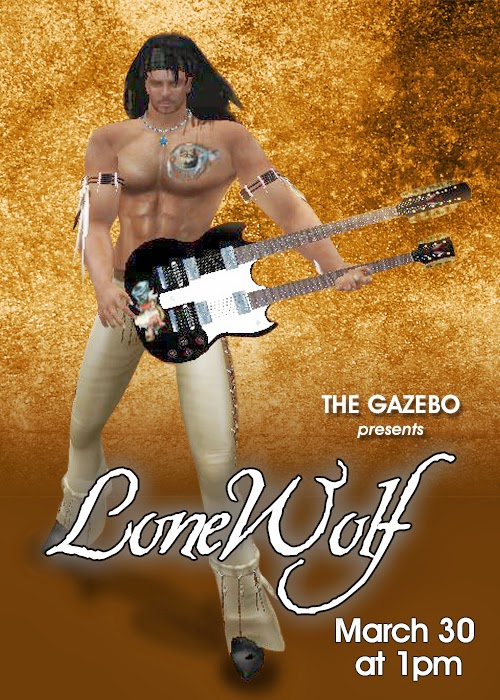 Who is LoneWolf55 Genesis? He is a singer in First Life and Second Life. He is a man who sings from his heart with passion born from his love of humanity and compassion for their pain. His genres include: Country, Rock, Classic Rock, Blues, Oldies, R&B/Soul, and some Classical. With the largest Song list in S/L over 750+ songs adding more daily.! 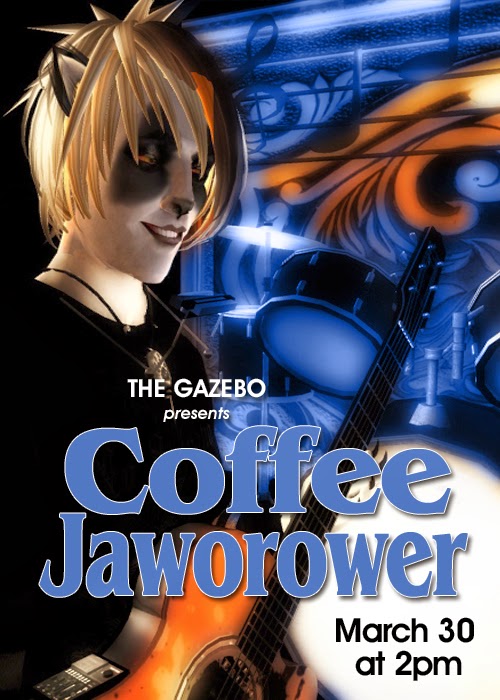 Coffee (bear) Jaworower is a live musician. He blends classic covers from the 60's onwards with more obscure bluesy edged tunes throwing in the odd originals. His instruments are his acoustic guitar and harmonica and with these he will often include electric guitar and keyboard solo's with live looping and harmonic chorus.
If you are ready for a new breath of fresh air in the Live music scene of SL you should take a shot at Coffee's shows:-)
By Lotta D. Difference at March 30, 2014 No comments:

Join us today for breakfast - Meet and Greet

Come wake up and fill your mugs with all the coffee you need to start your day with us. Meet your fellow picnickers and grab some info on how cancer can affect mental health. Fellowship
Spend some time getting to know your fellow Relayers and find out why they Relay.


PATH HAS TO CANCEL DUE TO ILLNESS
Seductive Dreamerz has Path djing for 2 hours tonight, 6-8pm slt. What's the theme you ask... right now, I'm not sure, but if you show up naked it's all good! It's ok, it's an adult sim and usually Path's clothes fall off there sooner or later!

The Gazebo has the ENTERTAINMENT!

Nothing at the Paramount Grand Theatre, until April 5th, BUT UNTIL THEN, come to The Gazebo for some live singers and dancing!

Saturday, March 29th at 6-8pm slt - DJ Zea
(She'll dj when her real life lets her. Watch out for a notice in the Paramount group on what theme she comes up with!)

SLURL to the Paramount Grand Theatre & The Gazebo
http://maps.secondlife.com/secondlife/Diamond%20Gardens/75/58/22
By Lotta D. Difference at March 25, 2014 No comments:

Incase you haven't come by...

Check out the theatre page for pictures of the new building!
By Lotta D. Difference at March 24, 2014 No comments: 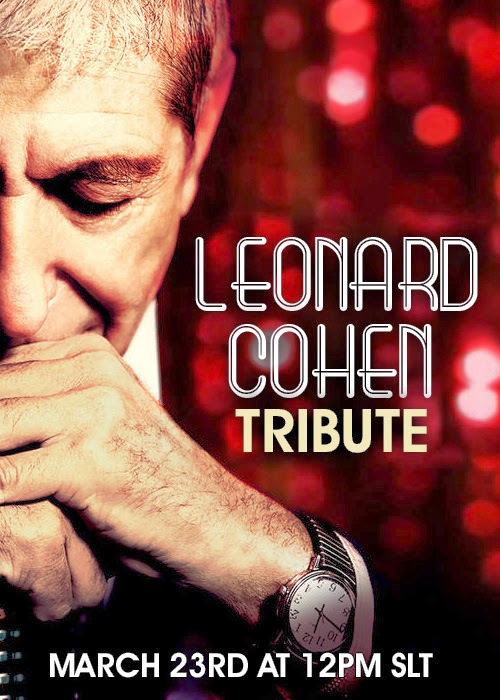 Path will be djing at The Gazebo for an hour, his tribute to Leonard Cohen.

Leonard Norman Cohen, CC GOQ is a Canadian singer-songwriter, musician, poet, and novelist. His work has explored religion, politics, isolation, sexuality, and personal relationships. Cohen has been inducted into the American Rock and Roll Hall of Fame and both the Canadian Music Hall of Fame and the Canadian Songwriters Hall of Fame. He is also a Companion of the Order of Canada, the nation's highest civilian honour. In 2011, Cohen received a Prince of Asturias Award for literature. 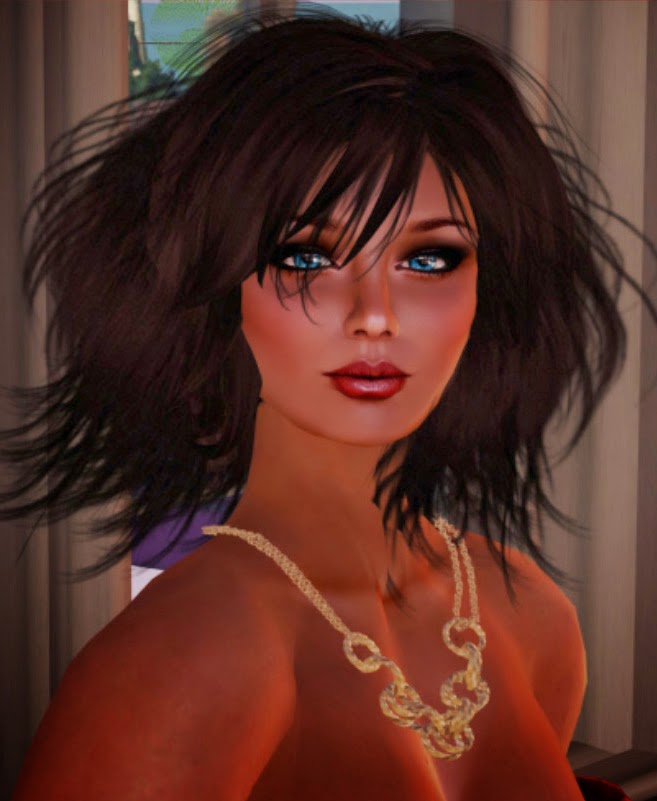 Scooter says she wants to be a blues singer when she grows up, but knowing her she'll never grow up, so why wait? Scooter has performed for many years in real life singing a variety of different styles of music drop by for an hour of great live singing! 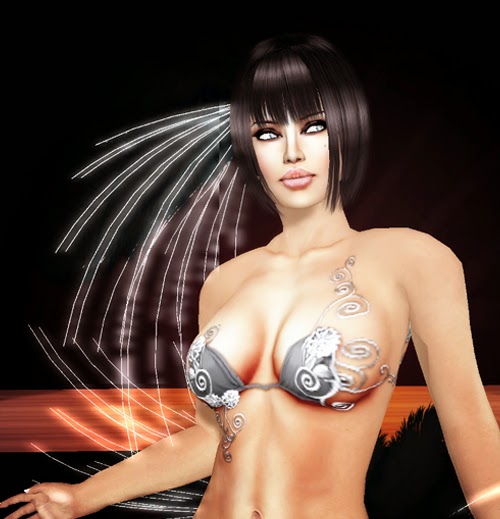 SL comedienne Vicki Eriksen is available for clubs, private parties and any other event if you would like something a little different!
Vicki does a combination of stand-up, burlesque and vaudeville ... or let's just call it a series of jokes and small acts of a rather bawdy and (sometimes very) naughty nature. It's definitely NOT PG material
By Lotta D. Difference at March 23, 2014 No comments:

It's almost time for us to reopen, yay!

Saturday, DJ Zea will be spinning her turn table at The Gazebo from 6pm to 8pm slt. This may or may not be canceled depending on Zea's real life health. But if she comes you are in for a real treat!

Sunday, starting at 12pm slt, at The Gazebo, Path will be djing a tribute to Leonard Cohen for an hour. Scooter Fallen will take the stage and sing for us for hour at 1pm slt. Vicki Eriksen will be back hosting and at 2pm slt, will make you laugh with her comedy!

Hope to see you all there. Old landmarks work, but if you made a landmark INSIDE the theatre, you may end up in a wall since the theatre is rebuilt! :D
By Lotta D. Difference at March 19, 2014 No comments:

Mental Health Awareness Retreat's Game Night in honor of the Relay for Life: A Journey of Promise!

PATH WILL BE DJING!

Hello and welcome to the Mental Health Awareness Retreat's Game Night in honor of the Relay for Life: A Journey of Promise!
http://relayforlifeofsecondlife.org/

We will be hosting our game night at the LA Lakeside Family Center.
http://maps.secondlife.com/secondlife/Labor%20of%20Love/212/111/35

Greedy:
200L Entry Fee
Person with the highest cumulative score at the end of the night wins a nifty prize!

Cards Against Humanity Tournament:
200L Entry Fee
Person with the highest cumulative score at the end of the night wins a nifty prize!

Truth or Dare:
Also no entry free, free to enjoy, if you DARE!

Sort of Monday news, it IS Monday afterall!

Vicki Eriksen is lining up entertainment for Sundays once again! March 23rd is when The Gazebo opens! Path will be doing a tribute to Leonard Cohen at 12pm, a singer (TBD) will be at 1pm and Vicki will do her comedy at 2pm. All times are slt.

Know of any great singers in SL that would love to perform on Sundays at 1pm or Saturdays at 6pm right before our burlesque show? Please send any information in to Pathmaker and Vicki!
By Lotta D. Difference at March 10, 2014 No comments:

The Gazebo is almost ready for some entertainment! Know anyone who wants to come and sing for us?! Let Pathmaker, Lotta Difference OR Vicki Eriksen know.

Vicki is in charge of Sundays, so you know of someone who sings on Sundays?! 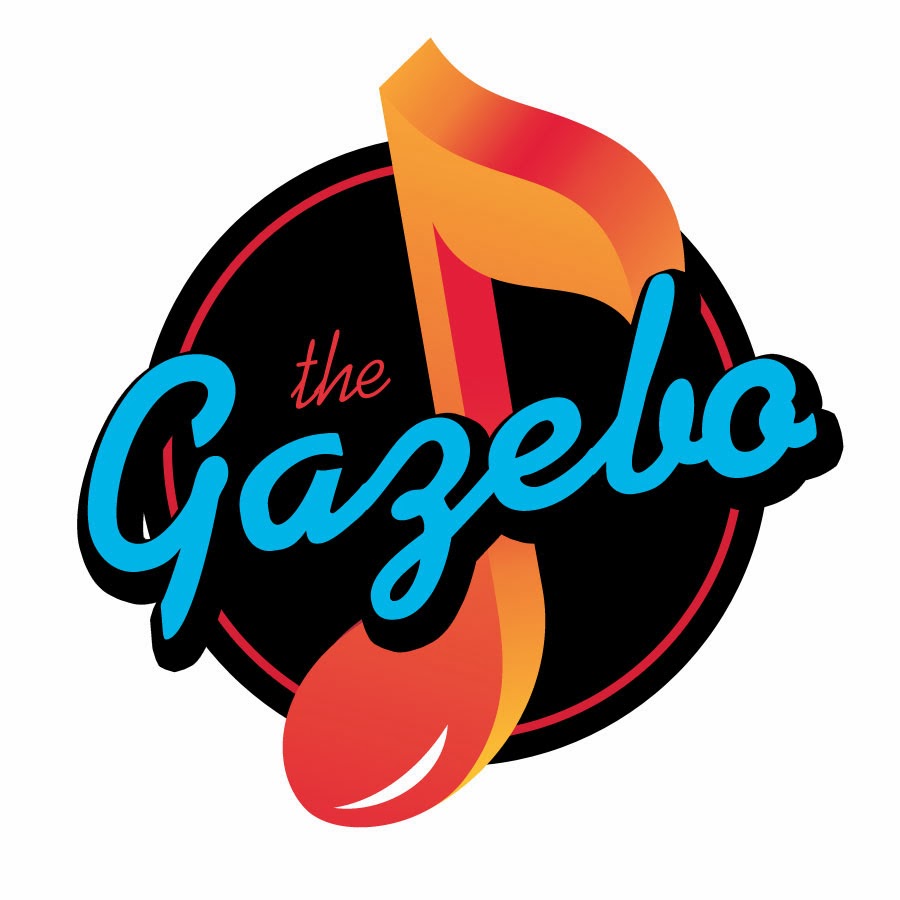 Drop by and take a tour of the new buildings. We have a bigger building for our burlesque shows for Saturday. Sundays and any other singer/entertainer we have come for your enjoyment, will be in the NEW area, The Gazebo. Bigger area for dancing as well.

Jourdaine is still in the lobby ready to meet and greet you, pet him if you like, he won't scratch!