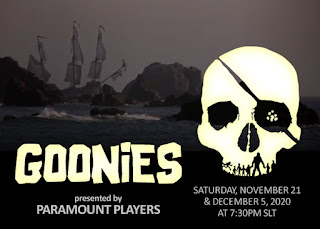 Come join the Paramount Players as they tell the adventurous tale of teenagers, crooks and treasure in Goonies, this November 21st and December 5th at 7:30 pm slt.

A group of young misfits called Goonies discover a map and set out on an adventure to find a pirate's long-lost treasure.

Mikey and Brandon Walsh are brothers whose family is preparing to move because developers want to build a golf course in the place of their neighborhood -- unless enough money is raised to stop the construction. But when Mikey stumbles upon a treasure map of the famed "One-Eyed" Willy's hidden fortune, Mikey, Brandon, and their friends Chunk, Mouth, Andy, Stef, and Data calling themselves The Goonies, set out on a quest to find the treasure in hopes of saving their neighborhood. The treasure is in a cavern, but the entrance to the cavern is under the restaurant of evil thief Mama Fratelli and her sons Jake and Francis and the severely disfigured Sloth. Sloth befriends the Goonies and decides to help them.