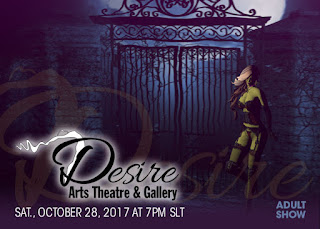 Desire Arts Dancers do a monthly "after hours" show. Starting at 7pm slt... we bring you the performance quality at our Saturday shows, with more skin... little less costume. Some acts do contain adult content.

As an "Arts" theater (and gallery) Desire Arts will be a venue perfectly suited for SL Performers wishing to express themselves through live performances, through Dance, Art Exhibits, Performance Art as well as Dramatic Presentations.

Also, Presentations of a controversial nature (including those involving sex, politics and/or religion) will be presented separately from the Dance Program. 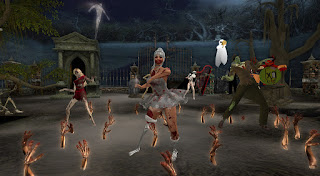 Our October shows are over and if you missed them, shame on you!!! But you are lucky enough to see some of these pictures! ;D
By Lotta D. Difference at October 22, 2017 No comments: 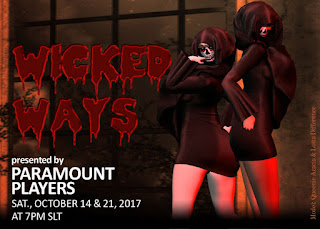 Come join us for an evening of classy but sassy entertainment as we the PARAMOUNT GRAND THEATRE, the Paramount Players dance for you October  21st at 7pm slt, in our new show, Wicked Ways.

The Players take you into the depths of Halloween with their Wicked Ways. Our Halloween show is full of scarey things that are Halloween... and dancing! Come and enjoy a Saturday night with the Players!

Pictures are coming to the blog I swear! I've... borrowed some from R. Crap Mariner and our Judith's pictures. Our Halloween show was a blast and we will be doing it again this coming Saturday! Hope to see you there!
By Lotta D. Difference at October 18, 2017 No comments:

Come join us for an evening of classy but sassy entertainment as we the PARAMOUNT GRAND THEATRE, the Paramount Players dance for you October 14th and 21st at 7pm slt, in our new show, Wicked Ways.

The Players take you into the depths of Halloween with their Wicked Ways. Our Halloween show is full of scarey things that are Halloween... and dancing! Come and enjoy a Saturday night with the Players!

It's October, one of our favorite times at Paramount. Halloween is on way and so is our Halloween show! What shall we dance to this month? You'll have to come to the show to find out. BUT here is a sneek preview to maybe peek your interest...


Here are some song facts for you to enjoy... 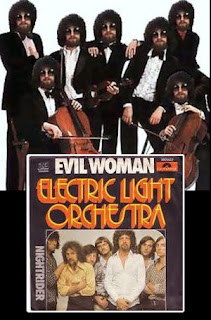 (from Wikipedia)
"Evil Woman" is a song written by lead vocalist Jeff Lynne and recorded by Electric Light Orchestra (ELO). It was first released on the band's fifth album, 1975's Face the Music.

When released as a single in late 1975, the song became the band's first worldwide hit. According to Lynne this song was the quickest he had ever written, in thirty minutes, originally as 'filler' for the group's Face the Music album. The song placed in the top 10 on both sides of the Atlantic in early 1976. The song became a hit again in the UK in 1978 when it featured on The ELO EP. The lyric "There's a hole in my head where the rain comes in" in the song is a tribute to The Beatles' song "Fixing a Hole".


(from songfacts)
This song was recorded at Musicland Studios in Munich, Germany some time in early to mid 1975. Jeff Lynne wrote the song on a piano in the studio on the last days of recording, writing it very quickly. The band's recording for all of the other songs for the Face The Music album had been completed when Jeff needed another song. One morning, while the rest of the band was out, he sat at the piano and played the opening piano riff, which became the basis of the song. Later that same day, the rest of the band came in and recorded the backing track. The lyrics were written and recorded the next day at Musicland. The string and female choir parts were recorded (and possibly written) later at De Lane Lea Studios in Wembley, U.K.


During the instrumental break in the song, when the synthesizer plays, right before the chorus starts up the second time, if you play it backwards, you can actually hear the synthesizer sound that plays in another song by the Electric Light Orchestra: "Nightrider."